Best Fish for A Nano Tank

Here’s a list of the best fish for nano tanks, along with two non-fish aquatic tank mates to consider.

You’ll also find a list of stocking ideas, fish to avoid, what you should consider before you buy a tank, and a few other helpful tips.

All these fish are hardy and need at least a 10-gallon tank to be happiest except for bettas.

With their beautiful colors and magnificent tails, Bettas are popular for small tanks. Bettas are also known as Siamese fighting fish because of the notorious gladiatorial combats between males.

While you can’t keep multiple male fish in a tank, you can keep a female betta fish sorority tank with multiple female bettas. Sorority tanks have 4-5 females minimum and ten maximum, with the smallest recommended aquarium size being 20-30 gallons.

You can keep bettas in community tanks. However, they can be feisty, so have an exile tank ready if things don’t work out.

Male Endler guppies are some of the prettiest guppies. They come in a variety of intense colors, rivaling bettas for beauty. Their colors intensify after age six months.

Endler guppies are prolific breeders and often hybridize with other guppies. They give birth every 23 days, so keep that in mind before adding males and females to the same small tank.

You’ll find that Endler guppies are relatively undemanding and easy to keep.

If you like rainbow colors, sparkling gouramis (pygmy gouramis) are worth consideration.

Sparkling gouramis need a 10-15 gallon tank with ten more gallons for each additional gourami. They prefer to be in groups of 5-6, which isn’t possible in a nano tank. While they’re generally peaceful, they may compete with other males.

Gouramis have a labyrinth breathing organ as an adult and come to the surface for air. However, they swim at various tank levels.

The electric red-orange color of an ember tetra can make a striking addition to your coldwater nano tank.

Ember tetras are peaceful fish that usually spend their time in the middle layer of your tank.

In the wild, their habitats are highly-forested, so they use plants and driftwood to hide. So, a planted tank with driftwood is an ideal habitat.

They’re happiest surrounded by other ember tetras, in schools of at least eight.

Zebra danios (zebrafish) are easy to accommodate and work well in a coldwater community tank.

Zebra danios have a distinctive horizontal bluish-purple stripe on a silvery-gold body. However, within the species are albino, golden, veil-tailed, leopard, and long-finned varieties.

They’re incredibly active and will spend most of their time toward the top of the tank.

Keep in mind that zebra danios are prolific breeders, so keeping males and females together isn’t ideal for a small tank.

6. White Cloud Minnows (Easiest Fish to Care for in a Bowl)

White cloud minnows are called the working man’s neon because they look similar while costing less.

You’ll want to keep your white clouds in schools of six or more. They’re peaceful, so you’ll want to avoid larger, more aggressive tank mates that think you’re offering them a snack.

Black-striped pygmy corydoras catfish don’t have a striking appearance on their own, but they have some interesting behaviors that make them intriguing.

Shoaling is rare for bottom-dwelling catfish, and you may even see them swimming in the middle of the tank, which is even rarer for a bottom-dweller.

You will want to keep a minimum of four, with eight being even better. But, of course, the more you have, the more impressive their schooling activity.

Pea puffers are the smallest puffers and are great for nano tanks.

While you can keep pea pufferfish alone, they do best in groups of at least three. In addition, they need at least a 10-gallon tank and can be territorial, so it’s best to have five gallons of water for each additional fish.

The six-ray corydoras is a bottom-dwelling catfish that prefers a sandy substrate. However, they also come up to the top of the tank for air.

While their tank will need a heater, it won’t need a filter since this species takes its janitorial career seriously.

You’ll need a solid container to move these guys because their spines can get tangled in nets and can puncture your skin. Their spines are mildly venomous, but the feeling is luckily like an ant bite.

Scarlet badis are beautiful scarlet-banded fish that many hobbyists keep for their looks. However, they’re sensitive to water conditions, so you’ll need to take special care.

Scarlet badis are more shyster than baddy with most species. If their tank mates aren’t calm, slow, and peaceful, they won’t leave their hiding places and feed. However, they do consider snails and shrimp as food.

They’re best in a dedicated scarlet badis tank. Male and female pairs are ideal, or you can keep all females with just one male. Males can be aggressive toward one another, so keeping only one male per 10 gallons allows them to stake their territory.

Aquatic snails of all sorts are great for helping keep your tank clean. They find algae, dead plants, and dead fish to be tasty delicacies, so you’ll want one around.

Some fish like to dine on snails, so be sure to determine your tank’s dietary preferences before adding one to your tank if you’re not adding them as treats.

Keep in mind that you still need to count the size of your snail for the sake of your tank’s bioload. Plus, you’ll want no more than 1-2 snails per five gallons.

Shrimp can make exciting additions to a nano tank. They come in various intriguing colors, and their movements are mesmerizing. The most popular is the red cherry shrimp since they’re hardy and easy for beginners.

You’ll want to make sure shrimp isn’t a dietary delight for other tankmates before adding them in.

Shrimp-only tanks can be enjoyable as well, whether you’re keeping them as a feeder tank or for beauty. However, it’s best to keep just one color per tank because hybrids will usually end up brown or clear.

There are several fish that don’t belong in a nano tank:

Exceptions are dwarf South American cichlids, which can happily live in 10- to 20-gallon tanks.

What Kind of Fish Can You Keep in a Nano Tank?

The best fish for nano tanks are small, hardy, and cold water fish.

There are two main reasons it’s best to keep small fish in a nano tank: fish quantity and quality of life.

Since the size of an aquarium limits the number of fish you can have, you can fit more small fish into a nano tank than large fish. Therefore, the smaller the fish, the more you can fit in your tank.

Additionally, if you keep large fish in a small tank, you aren’t providing them with a good quality of life. If your fish are nearly as long as the tank, they won’t be able to swim very far and will not live as long as they would in a larger tank.

Remember all those sitcom episodes with fish funeral scenes? Those are mainly the result of having finicky fish in a fishbowl (the original nano tank).

When you have a nano tank, you can overwhelm the bioload quickly (the nitrogen-processing demand of your filters). Overwhelming the bioload is especially likely if you’re not changing the water often enough and have a lot of fish.

Be honest about how often you will change the water before determining your fish types and aquarium size. For example, most hobbyists don’t recommend a nano tank under 20 gallons for beginners because it’s so easy to upset the bioload.

If your nano tank is the type that is too small for a heater, you’ll want to consider cold-water fish instead of fish that are accustomed to water that’s room temperature or above.

How Many Fish Should You Keep in a Nano Tank

When determining how many fish you can keep in your nano tank, keep in mind that you can keep one inch (2.54 centimeters) of fish per one gallon (3.8 liters) of water.

When determining how many fish to put in your tank, remember that fish grow and research their maximum adult size.

Keeping Fish in a Nano Tank – What You Need to Know

Keeping fish requires more than just a tank, fish, and food. You will need equipment to take care of your fish and a regular schedule for changing water.

How often should you change the water in a nano tank?

Not rinsing rocks, decorations, or the tank during water changes will help maintain healthy bacteria levels.

Tip: Don’t forget to add a water conditioner and ensure that the water you reintroduce into the tank is approximately the same temperature to prevent killing your fish.

Here are some of the best fish for nano tanks with ideas for gorgeous plantings.

20-gallon combo one (all coldwater):

What Aquarium Plants Can You Add to a Nano Tank?

Here are a few live plants that would work well in a nano tank:

Our Recommendation for the Best Fish to Keep in a Nano Tank?

Perhaps, the easiest fish to take care of in a bowl or small fish tank is White Cloud Minnows. It’s small (grows up to a maximum of 1.5 inches) and hardier than most small schooling fish, and can withstand most of the mistakes by novice fish caretakers. The only exception is copper medication.

Our Recommendation for a Great Nano Fish Tank 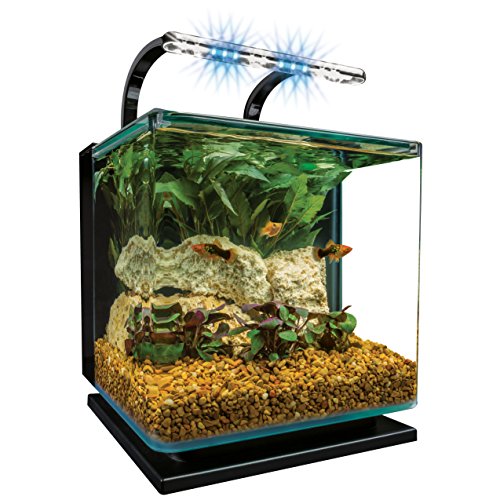 Here are answers to a few more questions you might have about your nano tank.

What Saltwater Fish Can Live in a Nano Tank?

Here is a shortlist of saltwater fish you can keep in your nano reef aquarium.

What Is Considered a Nano Tank?

Before you leave, check out our list of the most popular aquarium fish for more great ideas you can use in your next aquarium.

Follow Me
Jack Dempsey
Owner Tropical Fish Care Guides at Tropical Fish Care Guides
Jack has spent the last 10 years writing online about fish and aquariums. He has more than 30 years of experience as an aquarist and fishkeeper.He is an expert in setting up new tanks, breeding, maintaining, and keeping planted freshwater habitats. Jack is currently interested in marine biology, and veterinary science.His goal is to help beginners avoid the biggest mistakes when getting started. If you find something helpful please share it on your favorite social network. If you need help with anything send Jack a question. You can also find Jack writing for Backyardalpha.com
Follow Me
Latest posts by Jack Dempsey (see all)