Skulls are one of the those things that can make anyone feel a little uncomforatble. They can add a little mystery, danger or even make you afraid to even look at your fish tank.

Let’s say you want to give your next house guest that subtle threat….Sleeping with the fishes (Godfather anyone?)

Anyways, when I initially first started looking for the perfect skull ornament I had no idea there were so many variations like;

Skull decorations have always been a popular thing to put in your fish tank, especially if you’re going for that gothic, Caribbean, or even spooky look. Heck – maybe you just want your tank to look like a roman tomb.

In addition to looking AWESOME! Skulls are great for your fish, which love to explore and hide in the skulls and bones…I can’t get enough of it when my fish pick algae out of the eye sockets.

Whatever you’re looking for, you’ll find all the different skull Decor, Accessories & Ornaments you need below.

I even added some videos and some images of complete setups, using these skulls so you can get some great set up ideas for your next aquascape.

I hope you enjoy!

Here Are My Favorite Aquarium Skull Ornaments For A Scary Tank

If you’re looking for ideas for your next tank set up, why not try to incorporate multiple skulls.

In the video below, you can see just how great large skulls can look in your fish tank. In his set up below, Patrick Taylor has included many of the Blue Ribbon skulls as part of his Turtle/Cichlid tank, and oh boy, does it look cool.

If your interested, definitely check out the video description where Patrick describes his complete 55 gallons set up for this tank.

This great looking skull is called the Grazer, however I thought it would make more sense to call it the “Gazer” The way the shining red eyes look right through you.

This Skull will add a great touch of color to your tank (if that’s your thing) the orange flames on this skull look like it belongs on the Sons-Of-Anarchy.

Set this skull on some dark substrate and watch it almost jump out of your tank! 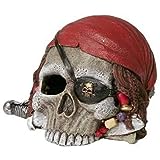 Get The Pirate Skull

The next ornament on our list could be used in a Caribbean themed tank, with sunken ships and treasure. With this skull in your aquarium, you may be wondering, “Why is the RUM always gone?” 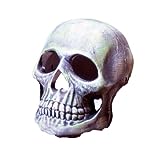 This nicely detailed human skull from Blue Ribbon is a great addition to any tank. This is the mini version, so it fits nicely into tanks smaller than 20 gallons. If you have a bigger tank, try one of the large skulls noted above.

The back of the skull looks as if a hammer smashed it; this is an intentional look!

To take this piece to the next level try running some LED lights into the eye sockets!

The three skulls below would be an awesome set up idea to celebrate “The Day of the Dead”. Or maybe you’re into Glofish? these would be great under a black light set up.

We threw the Zombie head ornament in here just for fun! Who know’s maybe Negan knocked this little guys head off?

For some inspiration on how to incorporate multiple skulls in your tank, check out the Tweet below from Paige Harris who found a pretty cool looking skull mountain for her tank.

Skulls everywhere, even in my fish tank pic.twitter.com/TU9kU3BXSd 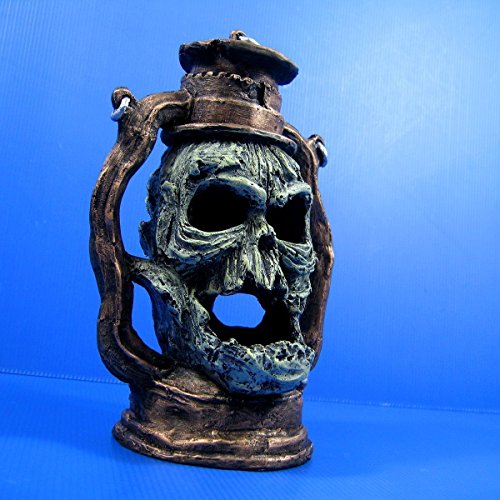 Get The Devil Oil Lamp Skull

This is a great looking ornament that is more like a cave than a skull, but it still fits into the theme of this list.

If you’re looking for something a little different, this vividly colored lamp will provide yet another creepy element to your tank set up.

Get The Skull Mountain Aquarium Ornament

Here’s another great piece of decor from Blue Ribbon.

Let’s say you have a Betta tank and want to make your little Brad Pitt as hardcore as possible. This skull cave will help achieve that! It will also give him a nice low flow are to chill in when he wanted to relax.

Add some marimo mosss balls and your Betta will really love it.

Get The Dinosaur Skull Aquarium Ornament

Enough said…This next skull would look great in a full planted aquarium with lots of little fish swimming around to give it that bigger than life feel.

Try out this Dinosaur skull in your son’s tank, what little boy doesn’t love T-Rex? 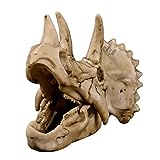 Get The Triceratops Skull Aquarium Decoration

What better way to follow up a T-Rex skull than with a Triceratops skull.

Pair up both skulls to take you back to a long-forgotten time where these two rumbled in the jungle.

Get The Dragon Skull Gazer Ornament

If Daenerys is a hero of yours, why not pay tribute to the mother of dragons with this very cool Dragon skull.

The teeth/horns/scales are very well-defined, and the little red jewel eyes have quite a shimmer.

Get The Crocodile Skull Aquarium Ornament

This Croc Skull features a mouth full of sharp teeth that will add a rugged coolness to your aquarium. But be careful the teeth might be too sharp for some delicate fish like a Betta.

One weird thing you’ll notice is the front teeth? I don’t think I’ve ever seen a crocodile with teeh like that, this is more like a vampire croc!

This is a fun tank that showcases a few of the skeleton’s below. I love guy steering the ship!

Get The Aerating Action Ornament, Skeleton

You’d be safer in a New York cabbie than with a skeleton at the Wheel!

This fun little ornament turns your tank into a spooky ride, as the bubbles rise the skeleton pirate steers the wheel. 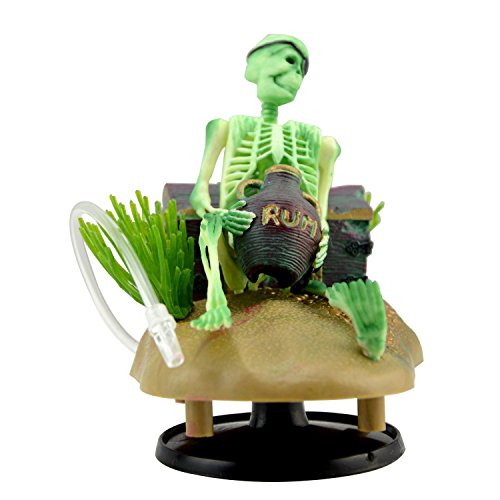 If you’re going for a pirate theme this skeleton decoration will help you complete the set and looks great next to a pirate ship.

Odd Skull Accessories For Your Aquarium:

Get The Skulls Viking Helmet Cave

I’m sure if Ragnar Lothbrok wore this helmet he wouldn’t have ended up in a snake pit.

Show your love for Vikings with this awesome looking helmet for an age old Norse theme.