African Cichlid Tank Mates That Get Along

If you’re looking for a tank full of colorful fish look no further than the African Cichlid. They are known for their exquisite coloring and somewhat aggressive nature. They get their name because they are widely found in several African lakes.

Since they are used to the rocky terrain that lakes offer, it may be a good idea to provide rocks in their tanks. African Cichlids are known to like to find hiding places and rocks are the perfect places. Even little caves make great additions to the African Cichlid tank. Although they enjoy hiding out, African Cichlids are known to be active fish. Don’t be surprised if you see them swimming around a lot!

A Cichlids diet is varied; some like to eat algae while others prefer small insects and fish. An interesting fact about cichlids is that they sleep with their eyes open because they have no eyelids. Are they awake when they’re looking at you or are they sleeping? You’ll never know!

If African Cichlids are cared for properly they can live five to eight years in an aquarium. They can grow anywhere from one inch to three feet in size!

These are the ideal tank conditions: Care Level: Moderate
Ideal tank size:  Depends on the number of cichlids in the tank and their size, cichlids that are six inches or less should have at least a 20-gallon tank
Temperature range:  72-82 degrees Fahrenheit
pH Range: 7.8-8.5

Since African Cichlids are known to be territorial and aggressive, it’s best to keep them with fish of their own kind.

With that said you don’t want to have African Cichlids from closely related species together because they may produce undesirable hybrids. You can keep an Auloncara with Utaka and Mbuna cichlids from in the same aquarium.

However, It is not advised to keep cichlids from Lake Malawi and Lake Tanganyika together because they thrive best in different water environments.

There aren’t many fish that Cichlids get along well within the same tank. But, if you still want to add fish to your African Cichlid tank, you can give these eight fish a try. 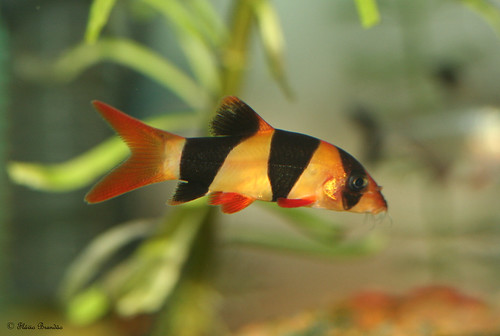 The Botia Loach is known to be a semi-aggressive fish so it should be able to hold its own with the African Cichlid. It’s typically tan and black and has four barbells that can be seen protruding from its mouth. This is how you know it’s a Botia Loach.

Like the African Cichlid, the Botia Loach likes to hide. So if you buy caves and rocks be sure there’s enough to go around for everyone in the tank! If not you’ll see the aggressive side of both fish come out!

Botia Loaches are typically bottom feeders so that’s the part of the tank they’ll generally stay on. For food, have bloodworms, brine shrimp, and plenty of flake or pellet food on hand for the Botia Loach. 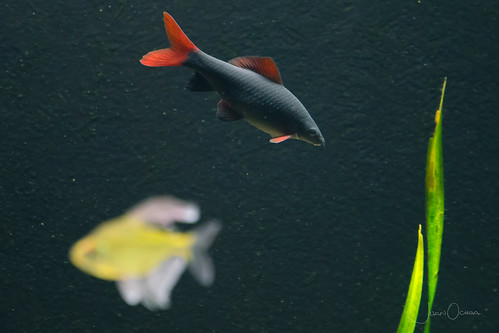 The Red-Tail Shark is a beautiful fish with its sleek black body and red-tail that it’s named for. But, don’t let their beauty fool you. These fish are semi-aggressive and are not just another pretty fish to look at.

That’s why these fish can only be tankmates with other fish that can hold their own, like the African Cichlid. Red-Tail Sharks are known to be territorial as well and may set up markings on the tank so there’s no mistaking what parts are theirs.

They also like rocks and vegetation. If you are adding these in with your African Cichlids be sure your tank is large enough. 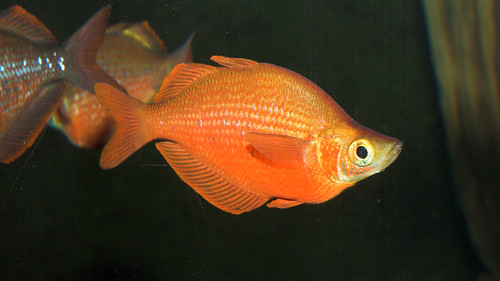 Red Rainbow Fish are omnivores and do best with prepared foods. Although these fish have big mouths they do best with small food. 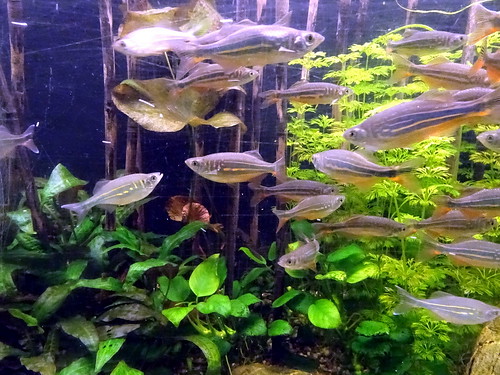 They are known to like their highly vegetated areas so add a couple of plants in there to keep them happy, but not too happy because then you’ll get the African Cichlids mad! The African Red Eyed Tetra can get fairly large so you want to make sure it has enough room to swim around the tank, especially if it is with the African Cichlids. These guys thrive in the same water conditions, making them good tankmates for that reason.

They are also not picky at all when it comes to food, similar to the African Cichlid. You can give it algae, frozen foods, flakes…anything goes with the African Red Eyed Tetra just as long as you feed it. 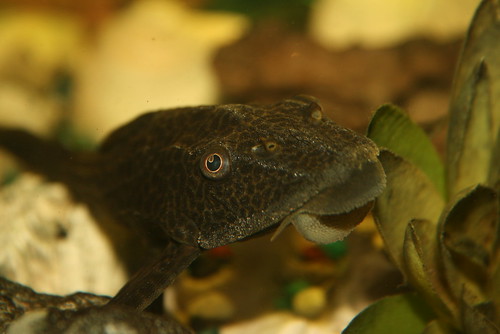 If you want to spend less time cleaning the tank, get some Plecos. They’re bottom feeders so they love to eat algae meaning you don’t have to clean it up.

Since Plecos will mainly stick to the bottom of the tank, the African Cichlids will have plenty of room to roam and shouldn’t get angry. They are also less likely to get territorial with the Plecos because the Plecos won’t be fighting for the same spaces around the tank, just the bottom. 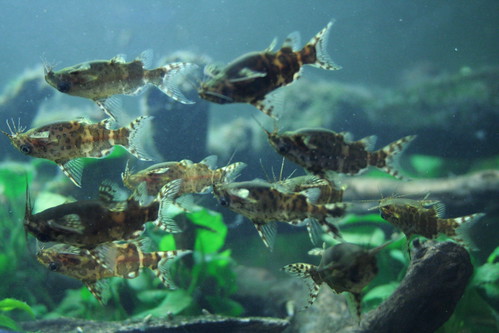 Scavenger Catfish like to hide just as the African Cichlids. Buy plenty of little rocks and caves if you’re inviting them over for a sleepover. They enjoy tanks with sandy bottoms and lots of plants.

If you walk by your tank and notice your Scavenger Catfish hanging upside down, don’t get scared. They’re known to do so and it’s perfectly normal. Although Scavenger Catfish like to eat fish flakes, you should also throw in some sinking catfish pellets from time to time. These will help keep them in optimal shape. 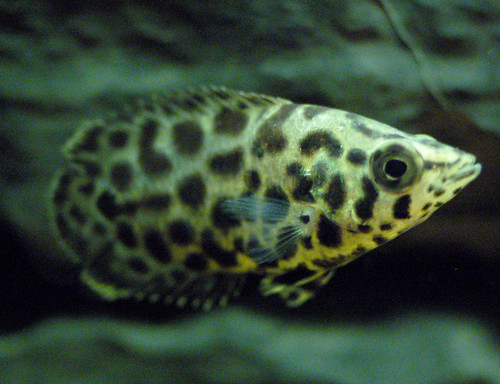 The Leopard Bushfish is known to have aggressive tendencies which make them a good match for the African Cichlid. They like to trick other fish into thinking they are pieces of leaves in the tank. But when prey swims by, they may attack. That’s why they’re best with fish that are larger, not smaller.

Leopard Bushfish can also be picky eaters. So you may need to cook separate meals when they’re with the African Cichlids. Small, live or frozen foods are best for this bunch. You may get them to eat some flakes, but don’t count on it. Leopard Bushfish are known carnivores so flakes aren’t going to cut it!

Seeing that there aren’t too many fish that make good tankmates that must mean there are plenty to avoid. Any fish that is small, docile, and not aggressive should not be mixed in with the African Cichlids.

Remember to be cautious when adding tankmates to the African Cichlids. They’re not social butterflies so it may take them some time to warm up to their new roommates.

As you learn about tankmates for African Cichlids it’s also important to know some interesting fun facts and myths.

African Cichlids are great parents. Both the moms and dads take care of the eggs. The males protect the nest against predators while the females move their tales to mix water and make sure the eggs are intact.

African Cichlids have the fastest evolution of all vertebrates. Single species of cichlids evolved into 500 new species during a period of one million years. Compare that to the ape that only evolved into three different species over a matter of 10 million years.

African Cichlids are not “killer fish” like some people like to think. Yes, they are aggressive. But, they don’t kill everything in sight.

One of the most well-known edible Cichlids is Tilapia which has been imported and farmed worldwide.

You may see Cichlids swim to the top of the water in the tank and maybe even try to eat out of your hand!

Cichlids like to dig up plants. While a couple may be nice for decoration inside the tank, you don’t want to add too many.

Cichlids are strong fish and are rarely prone to disease.

You do not need to add salt minerals to the Cichlid tank. They can thrive in freshwater just as well.

African Cichlids can make great additions to your aquarium. Just give them enough space and some cool hiding places! Remember to keep the small fish out and the big fish that can hold their own in with the Cichlids.

What kind of fish can you put with Cichlids?

Although most Cichlids would be considered aggressive fish most Cichlids can live with most loaches, catfish, shark species, plecos, and larger tetra species.

Can Cichlids and angelfish be in the same tank?

Angelfish are one of the more docile of all cichlid species and can live with other Cichlids from the same regions such as ram Cichlids. However, African Cichlids are not likely to get along with angelfish.

Can I put an Oscar with African Cichlids?

In this case, it’s not the Cichlids you need to worry about. Oscars should only be kept with other Oscars in very large and open aquariums.

Can Cichlids live in a community tank?

While most Cichlids are too aggressive for most community tanks there are a few more docile Cichlids that can be used in a community tank such as; Angelfish, Rams & Apistogramma.

Did you know you can keep some Cichlids in tanks as small as 10 gallons? Read our article about Cichlids for a 10-gallon tank.