The first time I saw a tank filled with pirate ship aquarium decor, I was in awe. For one thing, the pirate ship was as big as the tank, so there wasn’t much room for fish. But, still…it was a pirate ship!

Whether you’re building an aquarium for a kid or you’re a kid at heart, deciding what to put in your pirate ship aquarium is a lot of fun.

I’ve collected a selection of five pirate ship aquarium decorations that will work in various tank sizes and settings. For example, you can choose from a pirate ship, skull, cannon, treasure chest, or skeleton pirate captain. Perhaps even add several together in a larger tank.

My aesthetic for a pirate ship aquarium is more on the dark side. Imagine a sunken pirate ship deep down in Davey Jones’s Locker full of ghostly pirate skeletons. It’s dark and just a little creepy. But, there are fish swimming in and out of the torn sails of the ship. And the captain is still at the wheel. Interested? 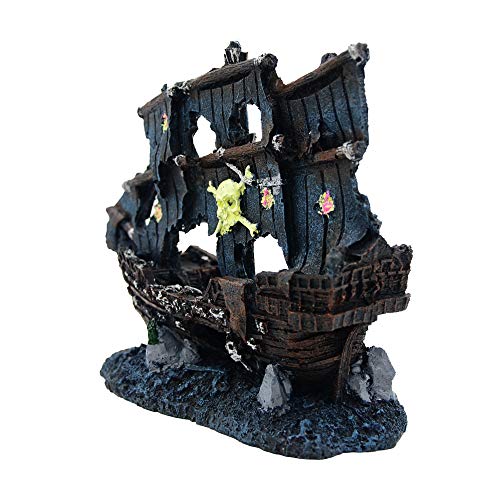 You absolutely can’t have a pirate ship aquarium without a pirate ship. It’s just not an option. I’m in love with this one because it’s dark and eerie.

The sails are tattered with holes in them just big enough for your fish to swim through. I love the way it looks when my ember tetras swim through them. It’s just magnificent. Some of my fish like to hang out on the deck as well. I imagine they’re all pirates.

I have aquarium lights with multi-colored options, so I like to adjust them to make the ship glow in eerie colors. 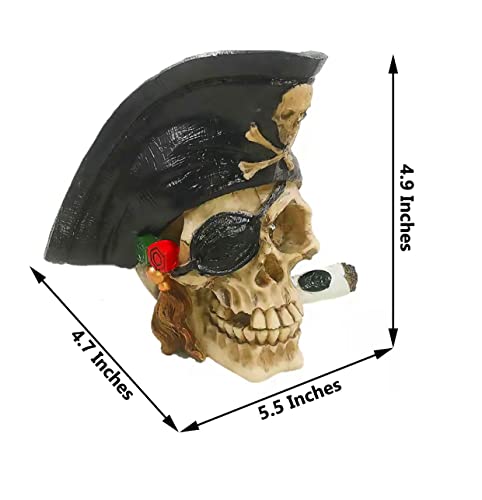 I like the ambiance a pirate skull adds to a tank. Of course, a pirate skull is creepy on its own, but it’s extra cool to watch fish swim in and out of its eye and nose sockets.

This pirate skull still has its doo-rag on over its beaded dreads, has a knife in what is left of its jaw, and is wearing an eye patch. Is it really a pirate without an eye patch?

In a small tank, this could be your main pirate-y decoration. It could be a part of the overall pirate decor theme in a larger tank. However, keep in mind that it will be out of scale with the other decor from this list. 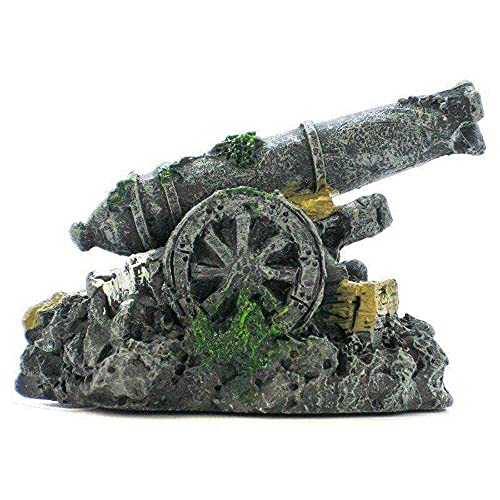 Having a pirate cannon in your tank is an absolute blast. It can add character to the overall feel of your pirate tank.

I like to bury mine a bit in my rock substrate to make it look like it’s on its way to reclamation from the sea. Because it’s a greyish-black color, it fits in well with almost any color decor you have in your tank.

There is a small opening in the pirate cannon, but it’s only about ¼ of an inch, which is too small for fish to use to hide.

The cannon is smaller than the description lists. However, at 2.5″ x1″ x2,” it’s small enough to fit in the palm of your hand and won’t take up a lot of room. Thus, it’s perfect in a tank of any size. 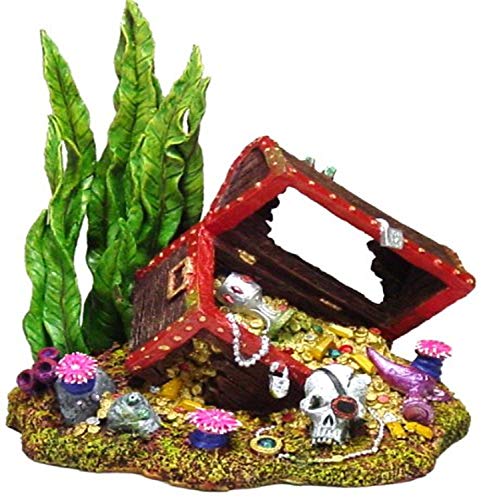 Ah, yes. Pirate booty. If a pirate ship went down, their treasure chest certainly went down with it.

This is a fun one. The treasure chest wood is rotting away and is spilling out jewels, goblets, bars of gold, gold doubloon, and even a genie’s lamp upon the ocean floor. An eye-patched pirate skull keeps watch. Meanwhile, seaweed and sea anemones have carried on living around it all.

This decoration can bring a splash of color to your tank and is a little kitschy, but it’s fun. If your tank has neon-colored elements already, it will fit in perfectly.

This treasure chest measures 5.5″ x4″ x5.25.” If your tank is too small for anything else, this sunken treasure chest has all the elements you need to express the theme of your tank. It will also work well with other pirate ship aquarium decorations in larger tanks.

Maybe place this booty inside an Aquarium Cave? 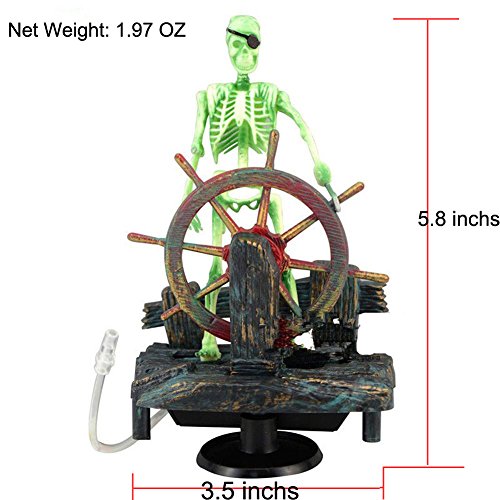 You probably didn’t know you needed a ghost pirate sea captain until you saw this. I certainly didn’t. But then I absolutely had to have it for my tank. So I’ve named mine Captain Bones.

The pirate captain doubles as an air bubbler. It’s easy to forget an air bubbler when you’re setting up a themed tank, but this guy won’t let you down. I like to bury the bottom in heavy rocks to keep him from floating upward in my tank. He really has to be weighted down to stay put.

The fun thing about Captain Bones is that he’s poseable. He constantly moves with the wheel as the air blows through him, and he occasionally turns his head (which is a fun way to scare little kids when they visit). He also has a hook for one of his hands and sometimes steers his ghost ship just with the hook.

This piece of aquarium decor is 3.5″ x2.3″ x5,” so he’ll fit in any size aquarium. He’s really fun in a small nano tank or can be part of the overall pirate vibe of a themed pirate ship aquarium.

Video: How To Build A Pirate Ship Planted Tank

My absolute favorite is the air-driven skeleton pirate captain. Yes, it’s cheesy, but if you’re going to go for a pirate theme, you might as well go all the way. And if your fish are all hiders like mine are, you’ll still have something to watch.

If you’re still looking for ideas for your pirate tank, you might want to consider looking at some DIY fish tank decorations to inspire you.