I compiled this care guide to help out beginners who are considering keeping these awesome fish.

The Tiger Barb is one of my all-time favorite tropical fish and so it seemed a natural fit for my first species profile.

To start here are a few quick care tips.

This fish is fast and fun to watch, its vibrant colors and semi-aggressive nature make it suitable for various tank communities, everything from Neon Tetra to Cichlid tanks.

Here’s What You Need To Know About The Tiger Barb

Tiger Barb behavior: Typically classified as a semi-aggressive fish as they are usually nippy and will chase down other slow or long-finned fish.

They are a shoaling fish, which means they like to stick together for social reasons and companionship.

When keeping them be sure to keep them in larger groups of 6 or more.

They can often be aggressive in numbers less than five and will nip fins of slower long-finned species.

However, in larger groups, they can be placed in a community aquarium.

You may notice some fighting or aggressive behavior towards other Barbs when you first add Tiger Barbs to your tank.

Pecking order or peck order is a term for a hierarchical system of social organization – https://en.wikipedia.org/wiki/Pecking_order

In your aquarium, they will mostly hang out in the mid-level open areas of your aquarium. So be sure to leave lots of swimming space between your plants and decorations.

Tiger Barb Size: They can grow up to 3” in length although they are often smaller when kept in your aquarium. 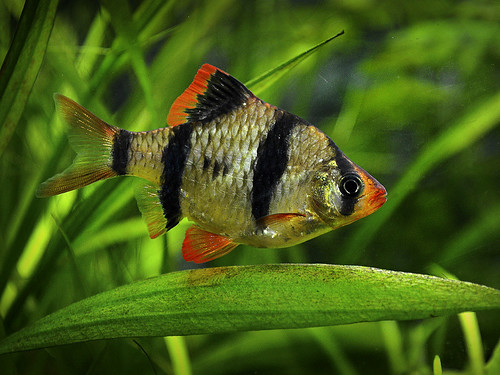 Video: Eye Of The Tiger Barb

Here’s a great video about the Tiger Barb created by Aquarium Outfitters you can find them on YouTube.

There are only a few varieties of the Tiger Barb found in captivity. In most cases, they have been selectively bred for their colors.

Below are examples of each variety of the Tiger Barb. Original Tiger Barb: Is a silver/gold with black stripes and orange accented fins. This fish is considered to be omnivorous which means it will eat pretty much anything.

Their diet should consist of vegetable-based flake, freeze-dried and frozen foods, supplemented with small live foods, such as bloodworms, glass worms, brine shrimp.

In the video below from Raheem Mcdermott, you can see how they attack these frozen blood worm cubes.

The filtration current also keeps the blood worms in a general circular movement making it easily accessible for the fish.

Ideally, the tank mates should “NOT” have long and flowing fins or be slow-moving. A Betta, for example, would “NOT” be a great companion.

As mentioned they are a very active shoaling fish and should be kept to groups of 6 or more. By keeping them in larger groups they can usually be kept with more docile tank mates.

They will work well with many fast-moving fish such as Danios, Platys and most Catfish.

One of the best tank mates provided there is considerable space is the clown loach, which will school with the Tiger Barbs and act as they do, and the tigers act as the loaches do In some cases, they can also be kept with some interesting tank mates like convict cichlids and piranhas. Check out the video from Criss Karver who keeps his Tiger Barbs with Piranhas???

The tank should be well-lit with ample vegetation, about two-thirds of the tank space.

The ideal aquarium would include the following elements:

Though I have never actually tried to breed this fish, there are numerous videos online that will help guide you.

Below is a helpful video from MA Fish Guy on how to breed Tiger Barbs.

After the video, I outlined some of the key points made by MA Fish Guy as well as some additional information I gathered.

Video: How To Breed Tiger Barbs

When breeding Tiger Barbs separate the males and females for three to four days. Keeping the females in the conditions noted above.

After four days you’ll notice a pregnant female will have a larger rounder belly and a mainly black dorsal fin.

The male will have a bright, red nose with a distinct red line above the black on their dorsal fins.

After the four days if you notice any pregnant females you can reintroduce females with the males.

Once in the breeding tank, the female will lay the eggs and the male will follow behind to fertilize the eggs.

The female will typically lay several hundred eggs during the early morning. The eggs will sink to the bottom and stick to plants or the gravel bed.

Note: Tiger Barbs will usually eat any of the eggs they can find after spawning, so if you are serious about breeding trying using marbles in the bottom of your breeding tank. This will allow the eggs to fall between the marbles and out of reach.

Here is a video from Bienvanumarie5 of a female laying eggs and a male following closely behind fertilizing.

After the eggs hatch the Fry will take about 5 days to develop and you should start to see them free-swimming. Overall they seem more susceptible than other species to ich and cottonmouth.

To prevent these diseases be sure to follow a regular maintenance schedule and do your weekly water changes.

If your Barbs have contracted Ich or another disease refer to our big list of fish diseases which outlines common causes and cures.