Can Goldfish Live In A Bowl?

A Goldfish could live in a bowl, but it’s not ideal.

Goldfish won’t last very long if you keep them in a bowl. Goldfish produce a large amount of waste and a small bowl allows harmful toxins like nitrate & ammonia to build up fast and poison your goldfish. So a large tank is recommended with a suitable filter.

A LOT of people still believe that a goldfish can live in a bowl… you might be one of them.

The most common goldfish the “comet” is the type of goldfish most people envision in a bowl.

The common goldfish is typically sold for less than $0.25 as a “feeder” goldfish and sold when it is very small. However, though it may start less than 1 inch long a typical comet can grow up to 1 foot in length and live as long as 20 years if healthy.

And that fact alone should make it clear to you that a bowl is not a suitable home for your goldfish. But if you still need convincing please read on.

Further Reading: Interested in keeping Goldfish learn everything you need in our Goldfish Care section.

Two Big Problems with Keeping Goldfish in a Bowl 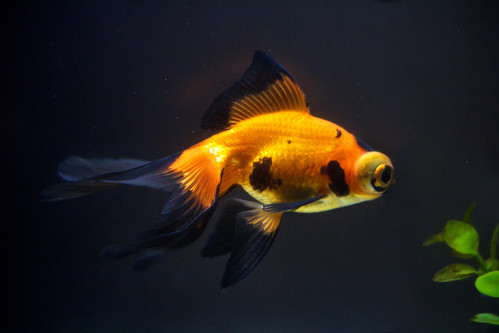 Goldfish produce A LOT of waste and most goldfish bowls are not big enough to be equipped with filtration. This allows harmful toxins like nitrate, ammonia to build up fast and poison your goldfish.

But I do water changes every week you say:

Well, that might help for a little while, but as that fish grows older it will produce more and more waste, requiring you to change the water almost daily.

But I heard fish only grow to the size of the tank they are in:

What If I Ignore The Warnings And Keep A Goldfish In A Bowl Anyways?

If you manage to stay on top of multiple water changes every week, limit the feeding and it doesn’t outgrow the bowl, your goldfish may live for a few years.

The most likely cause is that your goldfish will be unhealthy, weak, and slowly die from ammonia & nitrite poisoning, or it will develop bacterial or parasitic infection and slowly die a painful death….

How long will my goldfish live in a bowl?

To be very honest, not long at all.

If you don’t stay on top of multiple water changes a week the toxins in your bowl will build up an quickly kill your Goldfish.

As I mentioned above Goldfish can get over a foot long so a large tank 30-gallon tank or more with a filter is recommended.

Okay, So What Is The Best Habitat For A Goldfish?

The best place to keep a goldfish would be in 20-gallon tank with a filter or two that can process approx. 10x that gallons in the tank.

What I mean is:

If your tank is 20 gallons you should have a filter or filters that can clean up to 120 gallons per hour. Seriously goldfish produce A LOT of waste.

Here’s a video showing the size a goldfish can grow if given the proper care.

Goldfish Bowls Should Be Banned…..

Sounds drastic….But hear me out.

As I mentioned above goldfish can grow up to 1 foot in length and can live for as long as 20 years. Needless to say, they need A LOT of space.

They are also very social fish and love to have a companion to interact with, so if you’re going to get one, plan for two…Kind of like kids…get the big house with at least three bedrooms and a big yard, trust me they will grow into it.

Here Are A Few Guidelines for Keeping Goldfish:

Get A Bigger Tank

Goldfish produce A LOT of Waste

As you might guess by now, goldfish produce A LOT of WASTE. The smaller the tank the faster the harmful toxins like ammonia and nitrate will build up.

A small tank kept unchecked could slowly kill the goldfish by slowly burning their gills, fins, and scales. Your set up should provide sufficient filtration, meaning at least “double” the gallons in your tank or as we recommended earlier 10x to keep it really

Goldfish A LOT of Oxygen!

To give your goldfish enough oxygen you want a tank that has a lot of surface area. So a rectangle would be better than an octagon and better than a bowl.

Odd shaped tanks don’t have the surface area needed and can easily become de-oxygenated. Ideally, get a pump that creates a lot of bubbles and surface movement.

Can Goldfish Live In A Bowl?

Don’t keep goldfish in bowls or other small odd-shaped items, not created to keep fish. It will ultimately kill your goldfish slowly through deformities, stress, burns, choking.

Just because a goldfish can’t be squeezed and hugged like a new cuddly puppy doesn’t mean it should be treated less. Just like all pets, take care of them, love them and keep them healthy.

Can goldfish live in a bowl without a filter?

No, Goldfish are very dirty fish and in my opinion, goldfish shouldn’t be kept in a bowl, let alone a bowl without a filter. My recommendation would be to keep your goldfish in at least 30gallons and have a filter rated for at least 400GPH.

Can a goldfish live in tap water?

No, chlorinated tap water is harmful to all fish as well as the beneficial bacteria that you have growing in your tank. Also, untreated tap water can contain contaminants, might be too acidic or alkaline so it’s best to use something like Seachme prime to ensure the water is safe for your Goldfish.